Interview EQAsce I Interview of the month January 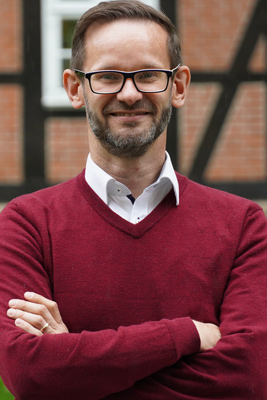 To the start of the new year, EQAsce has spoken to Dr. med. vet. Björn Petersen: Since 2011 he is a lecturer at the University of Veterinary Medicine Hannover (Germany), has done many EU- and DFG-funded research projects among other about genome editing and xenogenetics and has gained new findings on turning of boar’s smell at pigs with a research group at the Friedrich-Loeffler-Institute.

EQAsce What do the results of your research study mean for the global pork production?

Dr. Petersen In pork production, castration of male piglets is a problem and piglet castration without anesthesia of male animals is prohibited by law in Germany since January 2021. In the past years – and up to now -, there has been intense discussion about existing alternatives such as castration with anesthesia, immunocastration and boar fattening. Complete acceptance for one of the alternatives by all actors involved (meat industry, producers, consumers) is not emerging.

The aim of our pilot study was to set the base for an understanding of gender development in the pig and to evaluate the chances of influencing gender by doing genome editing. Additionally, the pig is an outstanding model for the human Swyer Syndrome that is based on a mutation in the SRY gene as well. People who suffer this gonadal malformation are male by genetics and form female genital organs.

For pork production, the findings of our study mean that in a long-term perspective there might be another alternative to avoid boar’s smell without interventions on the animal. But: For an application of this technology a different legal framework is needed. And the consumer acceptance is another obstacle to the application.

EQAsce How do you see the ongoing ethical and sociopolitical discussions about pig castration on the one hand, and the interpretation of an unharmed animal on the other hand – does violation of integrity start with genetic interventions already?

Dr. Petersen In the recent years, a major change has taken place in society concerning the discussion about ethical standards in livestock production. More consumers demand species-appropriate husbandry that avoids pain and suffering for the animals. This has led to a questioning of numerous zootechnical actions in animal keeping that I totally comprehend from a veterinary perspective. In this respect, genetic interventions on the animal must be seen as a violation of integrity but the turn off of the SRY genome goes without pain and suffering for the animals. Our data shows that these animals do not differ from their fellow species in development and behavior. To apply this technology, we have to choose an approach that leads to the genetic modification – which causes the developing of the female sex for genetically male descendants – by the boar’s sperm or by a boar that carries only x-chromosomal sperm which leads to female descendants only. At this point an ethical discussion is needed about the question if people classify genetic interventions at some sires as acceptable in contrast to surgical castration with anesthesia of millions of pigs.

EQAsce Which chances do you see to step from the development into application? From your point of view, what are promoting factors, what are obstacles to the application?

Dr. Petersen Regarding current legal and social conditions I do not see a chance of applying this study within the EU in the next time. The jurisdiction by the Court of Justice of the European Union (CJEU) about the latest breeding technologies has destroyed the interest of animal breeders because these organisms – independent from the degree of genetic intervention – are seen as genetically modified organisms (GMO) by the CJEU. This means stepping into a complex and expensive regulatory process. There are more generous classifications of this technology in countries outside of the European Union. And: Many genetic modifications that are discussed right now do not differ from naturally occurring modifications. Regardless of legal and social obstacles to an application, we have to succeed in generating a sire that passes on genetic modifications via its sperm to the descendants or just generally produces x-chromosomal sperm only. A following research project is going to try out strategies to reach this aim.

EQAsce Regarding the genetic intervention, what needs to be discussed first in society?

Dr. Petersen In general we must raise awareness among the people for the functioning of genome editing and what is possible with this technology. Additionally, it is important to point out that using genome editing includes addressing animal welfare and animal protection aspects such as disease resistance or avoiding zootechnical measures. In my eyes it is very important to not only do a risk assessment on genome editing but to show the risks of not applying genome editing. At this point the societal question needs to be answered, if the chance to avoid suffering, pain and possibly animal culling should be used. The base for this discussion must be a solid and common science platform. In this regard, there is still a lot of educational work to be done.

EQAsce Are there more research groups that deal with this research topic?

Dr. Petersen Yes, there are – especially in countries where jurisdiction has given a more generous classification of applying genome editing and countries where there is a public discussion going on (USA, Brazil, China, Russia, Norway). Regarding the avoidance of piglet castration, the US-company Acceligen has published interesting data and tries to market these pigs commercially. But this group has chosen a different approach: They turned off a different gene which leads to the fact that the pigs do not reach puberty/adolescence.